Ned Stark might as well have been sitting in our living room in Los Angeles whispering this in my ear in his raspy Ned Stark voice.  Winter was indeed coming, and quickly.

It was mid- September by the time I had picked up the keys and made my first trip to the cabin.  Jack had advised me that he normally shuts off the water to the cabin the first week of October, only a couple of weeks away!

I knew that I needed to start preparing for the quickly approaching season unless I wanted my first winter in the cabin to be a “Revenant” style experience, albeit hopefully without having to arm wrestle a bear with a cheese pairing knife.

I had gone out and met the “Landlords” on the way in this time.   I am a total visitor center junkie so getting to go to one to conduct “business” was a special treat.  The team were super wonderful and my forest service rep was a young, hip, rock climber who happened to hail from one of my favorite states – Wisconsin.  Yeah, the forest services rocks and rock climbs as it were! 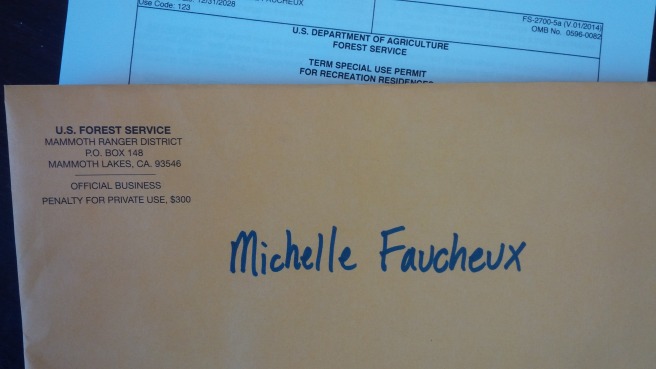 “What rolls down stairs, alone or in pairs, and over your neighbor’s dog?  What’s great for a snack, and fits on your back?  It’s log, log, log….”  Was running through my head as we headed over to the Mammoth Firewood Company to pick up some wood for the season.

I have to admit walking up to a two story high pile of wood and being allowed to have at it was some of the most fun I’ve had all year.  By the time we were done I definitely had a bit of a Paul Bunyan swagger happening and the subaru was being used for some serious outdoor recreation as well as testing out it’s load capabilities!

Now the question on my mind having never done this before was  “Was this going to be enough?”  Well it kinda wasn’t.  But almost.  Certainly did look sexy though. 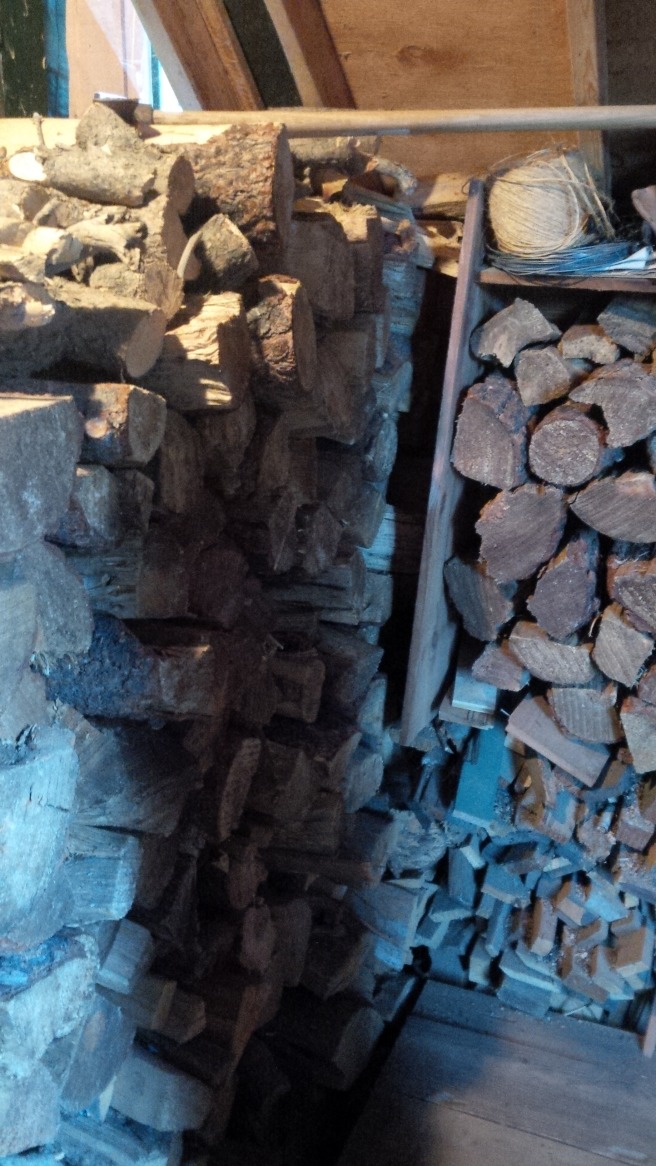 After all that manly labor it was time to take a well deserved break and some lumberjack refreshments…..

Now off to tackle the official water cut off for the season.  I won’t bore you with all the details but in short the water to the cabin is supplied by a small creek up the hill behind the cabin. It is gravity fed to the cabin by a series of twisty pipes running down the side of the mountain, true homesteader style worthy of the Kilcher Family.

To shut off the water for the season the first step is to cork the pipe up at the source, which is managed by the very high tech method of sticking a WINE cork into the pipe.  I can’t think of a more eco friendly, sustainable practice for a wine lover as myself.  Let’s just say there will be no shortage of corks to stem the tide each year.

Then you open up a series of pipes to drain the water off, ending with draining all the water out of the cabin itself and leaving the valves open.  I’m already anticipating flooding the whole cabin next year when I turn on the water while forgetting to close all the valves. I have written myself copious notes and warnings on every instruction sheet, typed or otherwise, and I am considering a tattoo on my wrist in Sanskrit stating  “Use this hand to close the house valves before turning on the water and flooding your whole cabin.”

Next up is a little anti freeze in the toilet and down all the drains, removing the water filter, and disconnecting the on demand water heater.  Ahhh the joys of hot running water, not to be experienced again till next spring or possibly summer if El Nino has her way with us.

Cabin winterization is officially done  (I hope I did it right)….now time to celebrate with a little Italian magnum from our friends at Poliziano!   Salute! 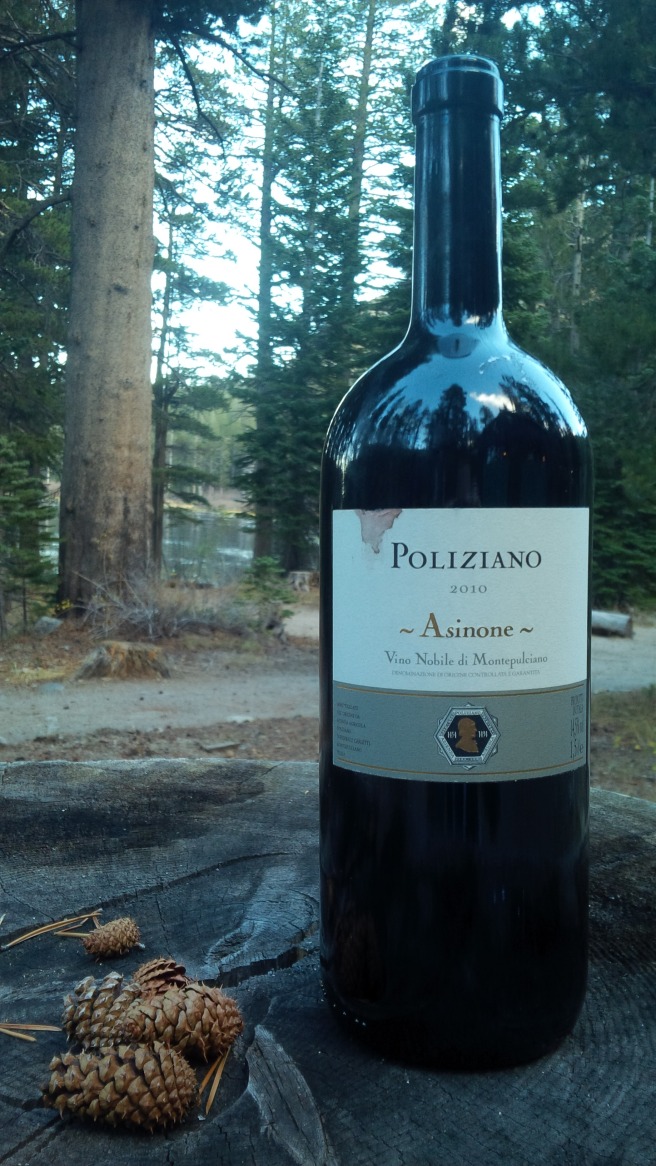 After a little wine in the afternoon we settled in for a cozy night of cabin exploring and discovered some cabin gems.

Old places have a way of collecting things and the cabin was no different.  I discovered a treasure trove of vintage park pamphlets, maps, and books about the local area.  Girl Scout nirvana!   Man from Mono was a total delight and a must read for anyone wanting to learn about homesteading in early Mono County.

Also, realizing that I had forgotten my book at home, I did a little searching and found a treat in the cabin library….who couldn’t resist a story about Barney and Big Boss Man Dan Peary.  I think I found Tarantino’s next script. 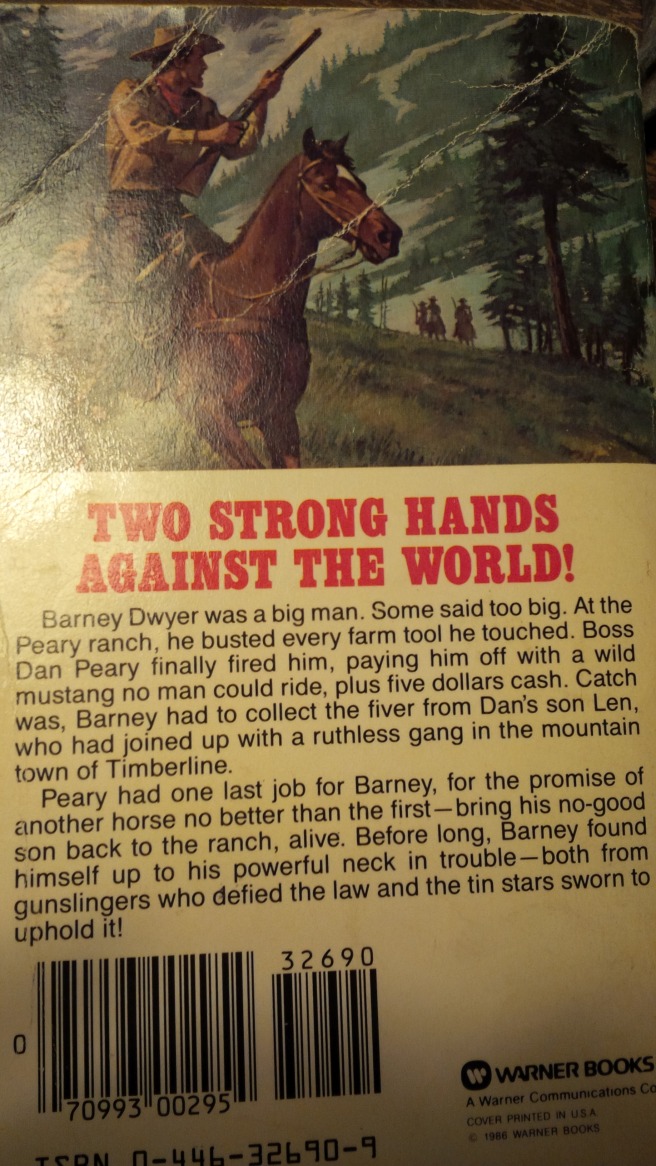 My favorite discovery though was this New Orleans Cabildo decal on the bathroom mirror.   I guess  this cabin was truly meant to be my mountain home.  Kismet. 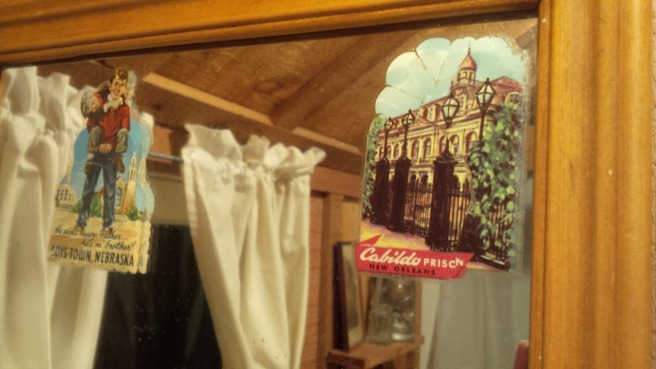 5 thoughts on “Winter Is Coming”

This was a trip that almost didn’t happen. A missed passport expiration date. A NYE experience that was cancelled 7 years ago because of a blizzard. Then we almost didn’t make it again. But here we are, and it’s been one of the best start of our adventures, ever. Did it mean more because it almost didn’t happen? I don’t know, but loving every second and appreciating the misadventure of adventure. Happy New Years world, we’ve got a lot of living to do.
I took a break from posting bear videos to finish the 2nd half of my mountain adventure. New blog post is up, link in bio!
On the 3 month anniversary of my hiking accident, I thought it fitting to share a blog post of my disastrous day in the backcountry of the Sierra Nevadas. It’s been a long slow road, and for a person who lives to be in the mountains, not being able to even walk outside for months has been emotionally taxing. It will be a bit longer before I’m out on the trails again, but the process of learning how to walk again has finally begun!
Made it out of the house (bedroom!) to celebrate another spin around the sun for @toddritondaro. I like to call it a jail break with palm trees and margaritas. I would also like to just advise all of my outdoor friends to never ever, ever, EVER break an ankle. I missed the “outside” so much!
Shared a look into our incredible fall road trip through the south of France with @yolojournal today in stories!
These girls are my people. Just sitting there staring at a sea of salt.
Join 670 other subscribers