As a group of energetic French tourists from Avignon on a motorcycle tour  sailed out of the cabin after partaking in some California Pinot I had on hand I felt like Louis the 14th holding court.  The Sun King may have had his lush golden palace but I had my lovely chalet in the wilds behind Mammoth Mountain.

It’s technically the summer in Mammoth Lakes being early June, but the shoulder season is hanging on for the town and I.  The upper lakes still had a firm grip on their winter coats come the middle of the month, although some resilient hikers and paddle boarders were trying to make the best of winter in summer!

The snow however was finally melting with a raging intensity causing roads to turn into muddy run off rivers, campgrounds to flood, and adding messy road work to the long list of spring repairs on my list.

I had a mini celebration upon arrival this time when the windows that had been completely covered 10 days before were finally exposed and I could have a view different than the backside of white that I had been gazing at for the past 5 months.  What a difference a few days make in the mountains!

I’ve been spending a lot of time this trip getting a head start on summer repairs and taking advantage of the 80 degree temps to sit outside in the sun and beam in the glow of actually being able to sit ON. THE. ACTUAL. GROUND.

The bustling waterfall in all its epic snow melt splendor seemed to be on the top of the tourism checklist as I watched an unending parade of folks tromp past through the slushy snow banks in attire ranging from full winter gear to shorts and muddy flip flops.

When they see a girl romping about outside hammering shutters, shoveling snow, drinking wine, or reading a book they can’t help themselves but to inquire what I’m doing here.

“Are you the caretaker?” they ask.  You could say that I muse, but not in any Jack Torrance kind of way.

“Are you renting this place?”  No, I actually own the joint hence why I am hammering madly at a loose nail drenched in sweat! 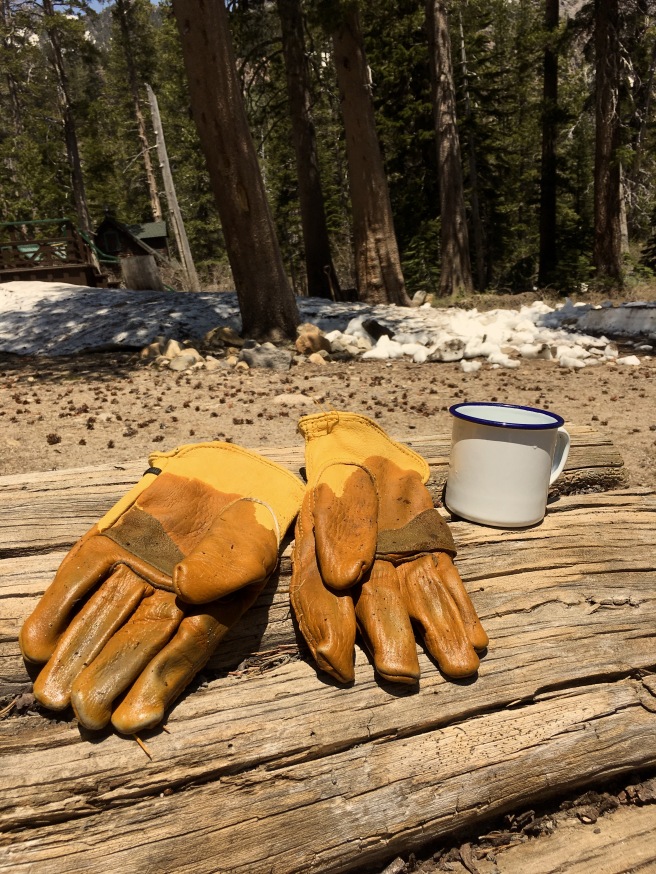 I’m considering proposing to the Forest Service a cabin version of the “Home & Garden Tour”.  In the last two days I’ve paraded at least a dozen people through the cabin.  Explaining it’s history, how the Forest Service cabin leases work (no they are not 99 years), pointing out the original 1920’s douglas fur floors, and telling them all about how “You too can own one of these if you are CRAZY like me”.  I’ve finally had to ask my realtor friend Jen to leave me a stack of business cards since some folks are pretty serious about investigating these little nooks and crannies of the Mammoth Lakes basin.

As the week meandered on I careened ahead with backbreaking cabin chores that mostly involved moving snow around.  There was still a LOT of it about.  In my efforts to unearth the fire pit and get access to the grill in our back shed the yard started to look like an avalanche disaster movie with snow strewn everywhere!

When I finally located the fire pit the weight of the snow had actually ripped the metal on the swivel arm, it and my sopping bathroom floors were both casualties of the 6 foot high snow bank still dripping behind the cabin.  Apparently there was lots of flooding in town and the main lodge had to rig up platforms for skiers to get across the pools of water spreading through the locker floors.

I had been chatting and getting visits from the power and phone company over the past few days, while enjoying our talks about this epic snow year, all of those visits ended with the phrase….

“We can’t quite get the truck down here yet.”

As 2 days wore into 3, I decided to take matters into my own hands- LITERALLY. There was one 2 foot high snow bank still blocking the road so I got to work clearing it out.

After a few hours of digging I succeeded in clearing a truck size hole in the snow.

Everyone thought I either worked for the Forest Service or was a good Samaritan clearing the path to the falls.  I assured them it was the entirely selfish reason of not wanting to go another day without a fridge!

What I found comedic was how many unaware people almost walked into my shovel in motion as they were trying to use the path I was in the process of clearing! I got one good natured man with a shovel full of snow, after we had a laugh he offered to do some digging for me.

The power company were good to their word and came back at the end of the day.  I toasted them as they shimmied up the tree and got the neighborhood reconnected! 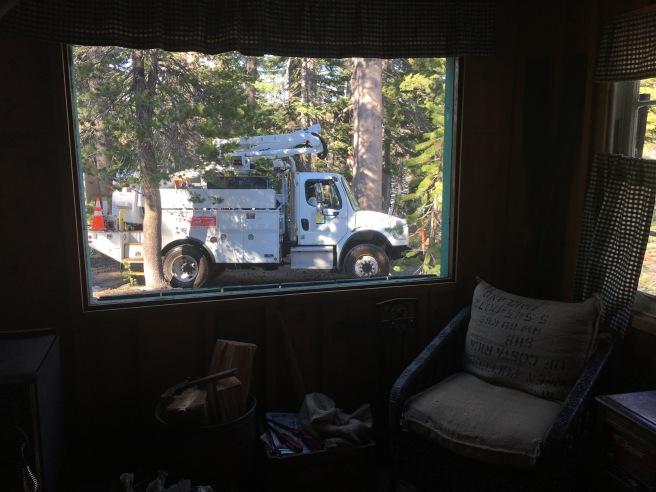 The phone company however still had a lot of work to do.  Those poor guys after discerning that our box had been struck by lightening and was completely burnt out, then hiked all the way up the hill and across the falls tracing the line trying to figure out where it was out.  Turns out two trees had fallen and knocked out the line on the other side of the falls so the construction team would have to be called in to clear it.

Still no phone, but by that night I enjoyed a glass of wine while listening to the delightful hum of the now working refrigerator and turning on every lamp in the house!

One thing that became clear as my week progressed with a stream of locals, technicians, and tourists was that no one had ever seen a winter like this in Mammoth.

It was truly a season of wonder and we were lucky to have survived it with just the inconvenience of no power or phone, and some minor repairs.  It seems on my second winter season at my little cabin in the woods I had gotten the full force of mother natures bounty and took it in stride and the joy of wonder.  It is a lesson in our world of amenities what little we actually need to survive and how if you just let go, all those conveniences are just another thing adding to the clutter of life.

I may have had one of my best birthday’s ever last fall, which was surprising for a year that was 2020. Friday lunch @galatoiresnola with a few of my best friends and forever pod. One of my dearest @joanneclose, knowing my love of polar explorers gifted me with this bottle of @theshackletonwhisky. It has finally made it’s way to the cabin. It’s going to be a good summer...
I just spent 10 days back at the cabin, mimicking the 10 days I spent there as the stay-at-home order went into effect a little over a year ago. I spent some time unpacking some moments from the lockdown. Unfolding them like linen napkins from my grandmothers armoire. Looking at each delicate fold and its embroidered threads. The difficult stitches and moments, and then that perfect crease of pure perfection. We survived the first year, we were beyond fortunate. As I see our friends in France and Italy roll back into more lockdowns, I wonder are we really on the other side of this? I hope the vaccinations prove true and we can all lay out our grandmothers linens in a celebratory feast around the globe.
Cabin still life.
@thecolumnshotel has created the parlor of my dreams, down to that owl on the mantle. It’s been a tradition for as long as I can remember to go have a Christmas drink at The Columns and I can’t wait till we can sit inside and enjoy this gorgeous room!
Porch sitting, is the best sitting.
Back in the atelier. Yes, that’s a pirate ship sticking out of the top of the armoire. No judging, it’s New Orleans.